by Mike Abelson   September 27, 2016
The Question Mark Guy offers insights for entrepreneurs looking for government grants, local funding, and other cash sources that you don’t need to pay back.
Lendzette Features 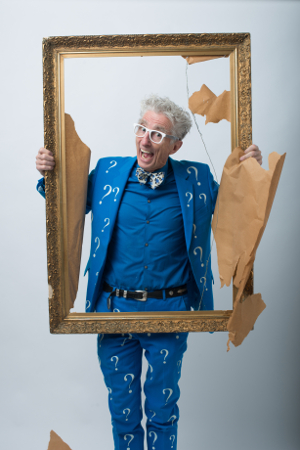 We dare you to find someone who knows more about “free money” than Matthew Lesko. For decades, the best-selling author and national icon has taught regular people how to get money from the government. He recently chatted with us about what small businesses should and shouldn’t do when searching for this type of funding.

How to Search for Free Money

“I think people give up too early on all this free stuff,” Lesko said.

One reason might be because people don’t know where to look. According to Lesko, there are three basic ways to find free money from the government.

The first is 211: a national number that’s localized when you call. It's set up by the Federal Communications Commission to provide easy access to human services, such as work support. According to fcc.gov, work support includes resources for job training, transportation assistance, education programs, and financial assistance.

“This is a national system that has been around for a long, long time,” Lesko said. “You can call them up and get your snow shoveled for free because there are non-profit groups that want to help the community.”

The second “basic rule” Lesko recommended is to head over to your local library and try out their resources.

Lastly, you should contact your members of Congress, state senators, and other elected representatives.

“Every one of those people is dying to help you,” Lesko said. “That’s how they get re-elected. They have better access to the funding than anyone else. When you call an elected official saying that you need money, most of their staff is there to handle these problems. That’s what they are there to do.”

Google can be little help when you’re trying to find accurate, unbiased information on free money.

One of the problems with running a Google search for government funding is that a lot of the results will be from commercial businesses, Lesko pointed out.

“Most of what you’ll find on Google when you search ‘grants’ is people trying to sell you money,” said Lesko. “Articles about grants are really superficial. Google doesn’t show you the good stuff.”

For instance, if you Google “how to get a government grant,” you may find people who want to sell you courses on the subject for thousands of dollars. But what Lesko says they don’t tell you is that the government has a program that’ll pay you to figure out how to write a grant. The government wants to pay you to learn how to get them to pay you more.

“It’s so bizarre, but it’s what the reality is, and people don’t realize it’s there,” Lesko said.

A lot of the time when you turn to the internet to solve a problem, who you’re looking for is an expert. Lesko said that we want to believe a so-called specialist because it takes the responsibility from us. That’s a problem, he says.

“The whole trap in the thing is believing an expert,” he said. “Experts don’t know anymore. They can’t. Things change so quickly. There are new ways all the time. What works for someone else may not work for you.”

Lesko said that the vast majority of venture capitalists fail. How could the internet’s self-described experts guide you to riches, when even the actual experts regularly mess up?

“The smartest people in the world put Wall Street down the toilet,” he said.

“Everybody has a thing, but nobody knows what works. That’s true in life and everything,” Lesko said. “I believe the name of the game in small business is staying alive long enough until you figure it out.”

He said it was like learning to walk. You’d never tell a toddler not to get back up after they fall. The same logic works with finding success in small business.

But while it’s important to keep trying after you make mistakes, you also need to ensure that the mistakes aren’t too expensive.

“I’ve written a hundred books, but only ten have made money,” Lesko said. “So I know I’m wrong 90-percent of the time. How do you plan for that? It’s not spending money. That’s how you stay in the game.”

“I used to buy ads, but they would never work. I’d go and spend $50,000 on an ad, and I’d lose it all. I realized that you don’t have to buy ads … What you have to do is test for free … You have to know something works before you spend a ton of money on it. That’s the way small businesses have to survive.”

Free advertising isn't impossible. Lesko told us about one of the times he was on the Late Show with David Letterman, and they went to a commercial break. Lesko mentioned that the sponsors were paying a fortune to run a commercial on the show while he was advertising himself for free by being interviewed.

According to Lesko, only 20-percent of the money the government gives out is called “grants.”

“So if you go out looking for grants, you will miss 80-percent of what the government is offering,” said Lesko.

It’s also important to remember that most free money programs for businesses don’t come from Washington. Lesko says that they come from the state and local level, and they usually want you to fit a requirement.

“The way to get money for an organization or business is to try to figure out what the government is trying to solve,” Lesko said.

One pitfall would-be entrepreneurs fall into is giving up on a business idea before they try it.

“What used to stop the average person from going into small business is all that stuff you had to go through to get it started,” Lesko said.

A way around this is to use crowdfunding to find investors.

“If you have a product nowadays,” Lesko said, “you don’t need to make it and put it in stores and watch nobody buy it. Now you use crowdfunding and say, ‘I have an idea,’ and you get the money to manufacture it.”

He said that this process could save everyone a lot of time and money.

“If it fails, it doesn’t cost anyone any money,” Lesko said. “This way you go right to the consumers and they as a crowd go thumbs up or thumbs down. If they like it, you have your money. If they don’t, you go figure out a new idea.”

Lesko built a career around helping people find free money. If you’re interested in more advice from Lesko, his website leskotutor.com is a great place to start. Lesko also has a YouTube channel that he updates “most every day” with videos about the latest sources for free money.